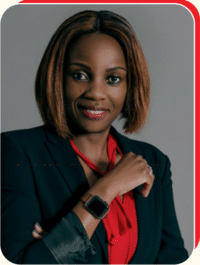 Mrs. Mtemererwa is a legal practitioner by profession having attained her LLB at Rhodes University in 2004, making the Dean’s merit list for academic achievement in her third year. She is an admitted attorney and conveyancer. Before joining Massmart in 2013 as Group Associate General Counsel, Kay worked as a Group Legal Advisor at RCL Foods for almost four years where she gained invaluable experience in commercial drafting, property transactions, compliance, consumer protection law and competition law.

In her current role at Masscash, Kay serves on the executive team, provides strategic-minded legal input and provides legal counsel and representation to the business with respect to the legal implications of major decisions, strategies and transactions.

Kay is naturally driven and has rapidly built a career as an in-house legal advisor. Kay was awarded the CEO citation award for demonstrating exceptional performance in 2015. That same year Kay spent eight weeks at Wal-Mart on a summer rotation program.

Mr. Tawanda Lloyd Gumbo has been appointed to the Board of Directors as an Independent Non-Executive Director. Tawanda is a Chartered Accountant (South Africa &Zimbabwe) with 30 years professional experience, 20 of them as a Deloitte partner in various African practices. He is a co-founder and chief adviser to private equity businesses and recently served as an Audit Executive Partner in Deloitte Southern Africa where he was responsible for business development across Africa. He is the outgoing CEO for the Deloitte West Africa cluster, a role which he held for over five years based in Nigeria. He has served as a member of the Deloitte Africa Executive Committee, and as a board member of the Deloitte Southern Africa cluster. Tawanda also served as the CEO of Deloitte Central Africa cluster for 8 years prior to joining Deloitte in West Africa.

Tawanda is a past President of the Institute of Chartered Accountants of Zimbabwe and has served as the deputy chairperson and member of the Zimbabwe Stock Exchange monitoring panel. He has also served on the council for the Pan African Federation of Accountants (PAFA) and as an Executive Committee member of the predecessor accounting body ECSAFA covering 29 Anglophone African countries.

The Board, Management and Staff congratulate Keresia and Tawanda on their new appointment and wish them every success in their new roles.